Chris Farley, not Mike Myers, was the original voice of Shrek! 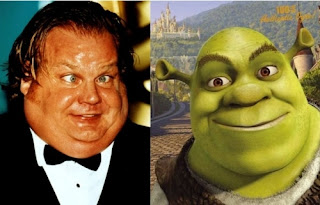 Chris Farley had recorded 80 to 90% of all the dialog for Shrek, when tragic news of his untimely death took the film's production into a completely different direction. Because of the way animated films are done, almost none of the animation had been done when Chris Farley had to be replaced. So, when Mike Myers was brought on board, he asked that the script be rewritten for him, because he didn't want to be seen as Chris Farley's replacement.
The difference in the scripts was pretty big. In the original, Shrek was a nice teenage Ogre with a heart of gold that didn't want to go into the family business of scaring people. It was Fiona, in this version, who was supposed to be the bitter and angry character. When Myers came on board, Shrek became the now-classic story of the Ogre who just wants to be left alone.
(Sources 1 and 2)