The famous story of America spending millions developing a Space Pen, while Russians used a pencil is FALSE. 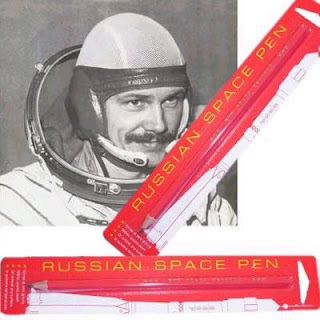 It's a classic cautionary tale on government excess: the American government wastes millions of dollars developing a pen that can write upside down, while the more resourceful Russians just used a pencil instead. It'd be a good story, if it were true.
In reality, the "Space Pen" was developed by a private company and were both cheap AND used by Russian astronauts as well. The Space Pen cost NASA $1.98 a piece, and the company benefited from being marketed as the Space Pen and it sold great among the general population. It was so successful that the Russian astronauts started using it too!
The kicker is this: pencils would be a terrible idea inside a space ship. Think about it: you have to sharpen them, which causes debris, the tips could break, which causes debris, if you erase something, it causes debris, they're flammable, they break easily. Can you imagine a pencil tip floating into a delicate piece of space ship machinery? It's a pretty widespread legend... but it's bull.
(Source)
Posted by FactsCollector at 21:39