The leader of Mexicos' most dangerous drug cartel was in a military group that fought against cartels! 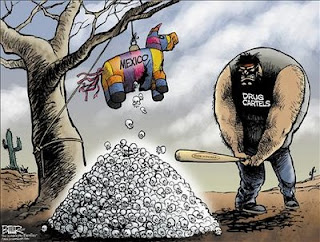 Heriberto Lazcano enlisted in the Mexican Army at age 17 in a group called "Grupo Aeromóvil de Fuerzas Especiales," which was a group of elite soldiers dedicated to fight against drug cartels. In 1998, however, a drug lord from the Gulf Cartel bribed him and 30 other soldiers to be his bodyguards.

This double-cross gave rise to Los Zetas. Lazcano was third in command and eventually became the leader of the group. In 2001, however, he would again perform a double-cross, this time agains the Gulf Cartel. Since then, he's engaged in a turf war against his former employers.

(Source)
Posted by FactsCollector at 04:50