The narrow pass from 300 was used by British armies in WWII to defend against Nazis!

The pass of Thermopylae is a real place that the 300 greeks used to mount their heroic stand against the invading Persian armies. The pass is thought to have been only 100 meters wide and provides a natural defensive opportunity against invading forces. 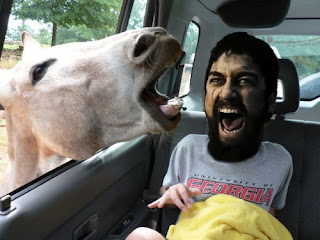 While the area doesn't look the same as it used to (in the movie it shows how it used to be near a sea, now the sea has retreated), it is still a great natural place to make a defensive stand. In World War II, British Commonwealth forces were able to make a successful defensive stand against Nazi forces just a few feet from the original battlefield!
In 1941, Australian and New Zealander brigades were ordered to hold the pass, allowing other brigades to evacuate the area safely. The end result was a success: Nazi forces lost many people, and 15 tanks. The maneuver was a success, with all brigades, including the two left behind, being able to evacuate the area.
Read more on it here.