There was a British sitcom about Hitler! 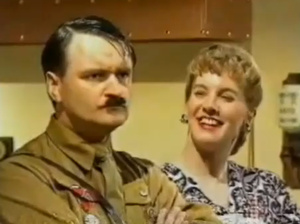 It was called "Heil Honey I'm Home!" and it was released in 1990. The show focuses on Adolf Hitler and his wife, Eva Braun while living next to a Jewish couple. Obviously, the show is centered on Hitler not being able to get along with his neighbors. The first (and only episode) centered around the Jewish couple crashing a dinner party that Hitler was throwing for Neville Chamberlain.

Although 8 episodes were planned (and some shot), only that first one was aired, as most people thought that the comedy was just too tasteless for television. The show was cancelled immediately and neither the pilot nor any of the other episodes were shown ever again.

(Source)
Posted by FactsCollector at 04:41